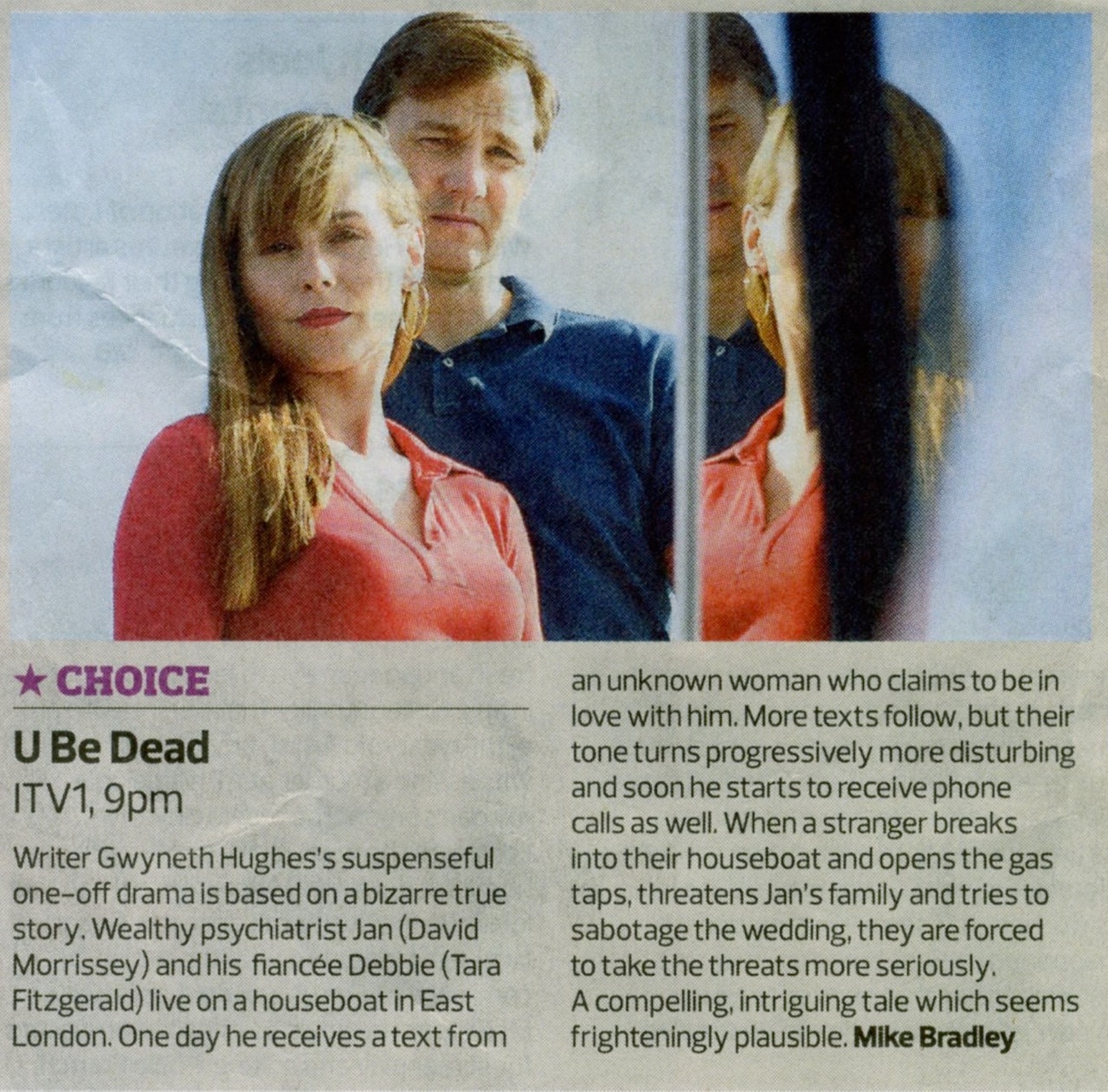 U B DEAD directed by Jamie Payne

U Be Dead tells the story of disturbed serial stalker Maria Marchese sentenced to nine years in prison for the sustained intimidation of a London doctor, his family and even the lawyer who prosecuted her. Dr Jan Falkowski (Morrissey) and his fiancée Debbie Pemberton (Fitzgerald) could think of no-one who would want to stalk them with threatening texts and phone calls. Even when the stalker professed to being in love with Jan, they refused to take her increasingly manic behaviour seriously until she attempted to cancel their wedding. In an attempt to flush the stalker out, Jan and Debbie eventually staged a fake wedding. Although Jan had now fallen in love with a younger woman, Bethan Ancell (Griffiths), he agreed to go through with the charade, shadowed by plain clothes officers. Warning texts and phone calls rained down on everyone connected to the wedding and Debbie was told to “prepare your funeral, not your wedding.” As a final text arrived - “U BE DEAD” - police surrounded the phone box it was sent from and arrested the woman who had been stalking Jan Falkowski for two years.

After initially denying she was guilty of harassing Jan, she then claimed to be texting him because he had raped her and that she had DNA evidence to prove it. As a rape suspect he was suspended from his psychiatric practice. An extraordinary trial followed which fascinated the media and public alike. The film is produced by Darlow Smithson (Touching the Void, Clapham Junction and the forthcoming The Diary of Anne Frank) for ITV1.

Matt rose to it, through the ineffable unlogic of that psyche. Others sink, through the same. The eviltude of Maria Marchese, a middle-aged Argentinian who decided – for reasons unknown and unexplored, perhaps it's a legal thing, this was based on real events and she's out in two years, gasp – to essentially ruin the lives of three people, on a psychotic stalking whim, terrified for its stranger-than-fiction truth, and helped make the best drama of the week, U Be Dead.

David Morrissey, – was wonderfully unsympathetic as the stalked doctor: Tara Fitzgerald, his slightly brittle chandelier of a fiancee, equally so. This was what made it compelling. You didn't have to like them, but you could empathise with the horror of the unfolding unknown, and mad, threatening texts. With the stresses, distrust, anxieties, you could watch the love melt like snow off a dyke, and then David's character, Jan, had to have an affair, the div, when he could have been reassuring Tara and then fuddling her over a solid leather chair, my own strategy of choice. But that's men, and it was true, and scarily gripping, and gave me hope again for ITV drama